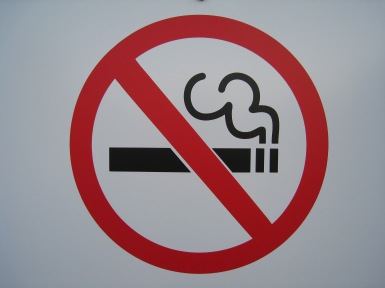 Though it now seems obvious, when 100-year-old Reg Hallam was growing up smoking was not commonly seen as a health risk. This US TV commercial from the 1950s sold Camels on the basis that ‘more doctors smoke Camels than any other cigarette‘ while Winston’s even recruited the Flintstones to sell its products. Meanwhile, in this terrific 1951 Walt Disney cartoon, Goofy found that quitting was difficult because so many people around him still smoked.

Though there was mounting research evidence of a link between smoking and lung cancer, the tobacco companies fought hard to refute it and at least half of US and UK adults remained smokers. It was not until 1965 that the UK government banned cigarette advertising on television, followed by the United States in 1970. Even today, nearly 1 in 5 UK adults still smoke.

However Reg ignored the hype and relied on the evidence of his own eyes and ears in deciding not to smoke: “When I was a boy, I had two uncles who were cough, cough, cough all day and that put me off.”

Now he sees that decision as the key to his long life, which saw him celebrate his 100th birthday in May 2015. His liking for the fresh air and exercise from playing golf might also have helped, as it has other centenarians.

So was Reg right to take notice of his uncles’ poor health?

Probability rating: 9 out of 10. If you are prepared to take only one action to help you live to 100, avoiding smoking is probably the one.

Smoking still accounts for 80,000 deaths a year in the UK alone and one in two smokers will die from the habit. The damage is not just confined to the lungs. It affects the brain, circulation, heart, stomach, mouth and throat, skin and even your bones.

All things considered, you’d expect no centenarians to be smokers. But of course you’d be w

rong: some centenarians have smoked all their lives (like the pictured Jeanne Calment, who lived to 122 -the longest-lived person in history – and smoked until she was 117).

Recent research however suggests that Calment and other long-lived smokers may share an unique set of genes that allow them to puff away for years but not suffer the health effects. That’s by no mean conclusive though and other studies have found that long-lived smokers suffer worse health as a result of their habit.

But even if the magic genes theory is correct, would you want to smoke? You’ll still have clothes that reek of cigarettes and food that doesn’t taste as good. And then there’s the monetary cost. If you started smoking today at the age of 20 and smoked a pack a day, by the time you reach 100 you’d have spent over £260,000.

Can’t be worth it, surely.

3 thoughts on “Secret no.36 Not smoking”