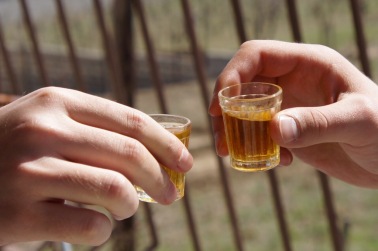 Katarina Pucic, Croatia’s oldest woman, celebrated her 107th birthday in the village of Barban on April 19th this year. Though her sight is failing she remains mentally sharp, to the point of telling a Croatian newspaper that she’s looking for a nice young man – ‘maybe someone 10 years older than me’.

Katarina has three sons (all of whom are still going strong and one of whom still cares for her daily), four grandchildren, nine great-grandchildren and three great-great-grandchildren. She can remember Croatia from its days of Austrian rule right through to Tito and the present day. She was five years old when Gavrilo Princip killed Archduke Franz Ferdinand, plunging the Balkans and the rest of the world into World War 1.

Brandy has a long tradition of medicinal use, most famously illustrated in the (sadly fictitious) barrels of brandy carried by St Bernard dogs.  However the evidence for it as an aid to long life is harder to find than a traveler in an Alpine snowstorm. One possible helpful ingredients is ellagic acid, which is also found in whisky, and which just might have anti-cancer properties. Another is ethanol, which may have anti-inflammatory properties according to this, very small, study of volunteers drinking red wine,vodka, rum or brandy. But in truth there’s little hard evidence for this version of the hard stuff.

Against that there’s all the evidence for the cancer-causing properties of alcohol even with moderate usage, plus the serious illnesses associated with over-use. And if just the medical evidence doesn’t deter, you might want to consider Edgar Allan Poe’s dependence on brandy to which he resorted as a ‘desperate attempt to escape from torturing memories, from a sense of insupportable loneliness and a dread of some strange impending doom’. It’s likely that the brandy contributed to the mental anxiety rather than prevented it, of course, and Poe died an alcoholic at 42.

Could Katarina’s local fruit brandy be any different? Unlikely, though you will find lots of articles claiming health properties for it. From one end of the Balkans to the other, rakija is sworn by as a cure for toothache, heartburn, sore throat, anxiety and scores of other ailments. It’s quite common for older Croatians to swear by a morning shot of rakija – and the habit is by no means confined to the Balkans. This study found that brandy was a very common form of self-medication by men over the age of 75 in Finland.

But if none of this has put you off you can either a) holiday in the Balkans or b) make the stuff yourself at home by following this step-by-step guide in Esquire. You will need:

But don’t let that put you off. 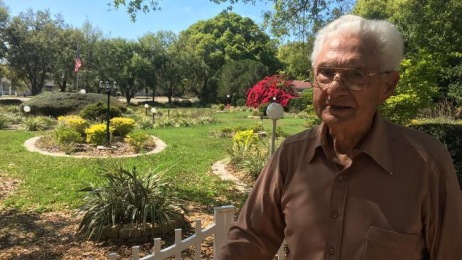 It took Woody Blevins 30 years to complete the work on his garden in Lake County, Florida,by which time he had turned 101 and the garden had become a park.

Bordered by oak trees, it has a flagpole at the centre and an intricate irrigation system. It’s home to 200 plants, including bougainvilleas, gardenias and lilies. “I didn’t realize I was making a park,” says Woody. “I just thought my lawn looked good.”

If you happen to be anywhere near you can pay it a visit (it sounds like it would be worth the detour) because Woody has donated the park to the town so that others can enjoy it. The rest of us can enjoy the video here.

Woody would spend up to eight hours a day on the garden-park, his neighbours growing used to the sight of him outside in his straw hat. He puts his longevity down to the work on the garden: “I love working hard and would much rather be outside helping grow something beautiful than out golfing,” Woody says.

A remarkable achievement, then, and a labour of love. But could it really have helped Woody live to 100?

Plausibility rating: 8 out of 10. Instinctively, we seem to realise that being in a green space like a garden is good for us. And lots of small studies have shown improvement in stress levels and psychological benefits of gardens. But until recently it was hard to find solid evidence to demonstrate long term benefits.

However a clever longitudinal study has now shown just that. It looked at the health histories of more than 100,000 woman over time and linked them to the amount of greenery near their homes (identified by satellite imagery). It found that those with the most greenery had a 12% lower risk of dying over the period of the study, irrespective of their age, wealth or other factors.

Why should this be the case?

As well as reducing stress, the authors suggest that having access to a park or garden encourages social engagement which, as we’ve seen, is an important factor in health. That’s certainly been the finding of other studies but it’s not obviously the factor that drove Woody’s long life: his was a largely solitary activity.

However they also suggest access to greenery leads to an increase in physical activity. That’s supported by other studies, including this one in Wales which found that those with allotments took more exercise than those who were waiting for them. That was certainly the case for Woody, who spent eight hours a day digging, weeding, watering and landscaping. And as this article points out, gardening counts as moderate intensity activity, just 2.5 hours of which can reduce the risk of obesity, diabetes, osteoporosis, depression, stroke, colon cancer and heart disease.

Not surprising then that ‘get gardening‘ is one of the lessons from ‘Blue Zones’, the geographical areas whose inhabitants get to 100 at ten times the average rate. People in Okinawa, one of the blue zones, look after their gardens as a natural part of their day.

And if you’re still not yet convinced, this 28-page report summarises all the many benefits of gardening and food growing (including, of course, the fact that you get to eat what you grow).

All in all, it seems Woody’s two remarkable achievements – reaching 100 and producing his amazing garden – may well have been linked after all.

And she credits that large family with her longevity: “My secret to a long life is a big family, and mine is all with me today,” said Edna.

We’ve (too briefly) discussed the importance of a loving family but is family more important than other relationships?

Plausibility rating: 7 out of 10

To start at the beginning: there’s little doubt that social relationships matter in later life. A huge meta-analysis of 148 studies involving well over 3oo,ooo people found that people were 50% more likely to be alive if they had strong social relations. Being lonely was as much of a risk factor as smoking and more of a risk than obesity.

That study didn’t compare the relative (sic) importance of family and friends. But this analysis of studies involving over 100,000 people did and concluded that family had more of an impact than other relationships. It quotes the Spanish proverb: ‘An ounce of blood is worth more than an pound of friendship’.

This is five generations of my own family at a recent reunion.

But it’s far from undisputed. This study in Australia found that close contact with children and relatives had little impact on survival over a 10 year period but a strong network of friends and confidants did improve the chances of survival.

It’s also unclear whether the number of social contacts matters. This big study in the United States found that size did matter whereas this one – there’s a pretty clear trend towards inconsistency here, isn’t there? – didn’t.

But perhaps that isn’t so surprising. Our social relationships are extremely complex and unpicking their relationship over time is going to be tough. Perhaps the most likely answer to our questions of whether family and family size matters is – ‘it depends’.

So let’s go back to Edna Owen, who seems to have been ahead of us in this debate. She said a big family was the key to her longevity but she then qualifies that and says: “Have a good family who loves you very much and will do anything for you.”

That echoes the research about why social contacts might matter to our health. One explanation is that they act as a ‘buffer’ between us and the big, bad world – when something goes wrong we have someone to talk to and make ourselves feel better. But the other explanation is that social relationships give us a role in our life and so bring meaning and fulfillment to it.

So when Edna says that she’s loved and that her family would do anything for her perhaps she’s also saying that that she has an importance and status as head of her family. And it’s not hard to see why that might matter very much.