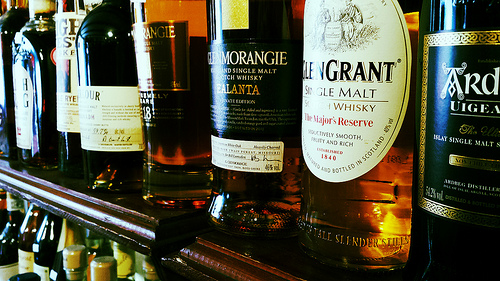 What is it with whisky? Lots of our centenarians have thought that a shot or two of Scotch was the reason they’ve made it to 100.

Recently we recorded the death of Ruth Newman, one of the last survivors of the 1903 San Francisco earthquake, who said that her longevity secret was a Scotch and water every night. We’ve also recorded the death at 111 of Nazar Singh, who cited good food, a loving family – and again a tot of whisky every night. And Agnes Fenton upped the alcohol stakes a little by saying her secret was three beers and a whisky chaser.

The most recent advocate is 109 year old Worcestershire woman Grace Jones*, who turned 109 this month (September) and has had a small glass of whisky every night for the last 57 years. Grace has lived through the reigns of five British monarchs, starting with Queen Victoria’s heir, Edward VII, and 22 British Prime Ministers, beginning with Henry Campbell-Bannerman. She’s led a bit of a nomadic life, moving house 27 times with her husband, Leonard but ‘Amazing Grace’, as she is known to her friends, is certainly consistent about her whisky – she told her local newspaper last year, on her 108th birthday: “I never miss it. I don’t drink and all I have is the whisky at night. Whisky is very good for you. He (her doctor) said keep up with the whisky Grace, it’s good for your heart.”

So is it? Or does whisky have some other quality that could possibly have helped Grace and some many other centenarians clock up their 100 years?

*Oddly, Grace is not the first Englishwoman called Grace Jones to hit 100. The ‘other’ Grace Jones lived in south-east London and, until her death in 2013 at the age of 113, was the last British person alive to be born in the 19th century.

Plausibility rating: 6 out of 10. We’ve explored other types of alcohol before and come to the conclusion that the case for it isn’t that strong. True, there is research evidence that a small amount of alcohol consumption is associated with longer life. However that evidence is disputed and once we go beyond a moderate intake, alcohol is associated with a whole lot of harm.

So why would a ‘wee dram’ be any better? Some people do use it as a nighttime sedative – the classic nightcap – so could that somehow help improve longevity? Sadly no. Alcohol may help you get off to sleep but the quality of that sleep is likely to be poorer. It does seem possible that whisky in the form of a hot toddy might help you with the symptoms of the common cold but surely that’s not enough to extend a lifespan.

However there are one or two qualities of whisky that might just put it above your average alcoholic drink and which perhaps justify our plausibility rating. For one thing, it’s relatively low in calories – about 75 in a small measure – about the same as a glass of dry white wine.  More importantly though it’s full of ellagic acid, gallic acid and lyoniresinol – all of which improve the antioxidant properties of your blood (wonderfully, the older the Scotch, the bigger the effect).  It even seems to work in practice – an admittedly small (in truth, tiny) piece of research involving the comparison of red wine, mature Scotch and a younger spirit found the Scotch had the greatest antioxidant effect. The research concludes that the findings are compatible with suggestions that moderate intake ‘decreases the risk of coronary heart disease’.

Which was exactly what Grace’s doctor said, wasn’t it? So we’re giving Grace (and her doctor), Ruth, Nazar, Agnes and Henry the benefit of the doubt and giving whisky a creditable six out of 10 as a longevity secret. Just remember to choose the very best, longest matured, single malt Scotch if you really want to live a long time.