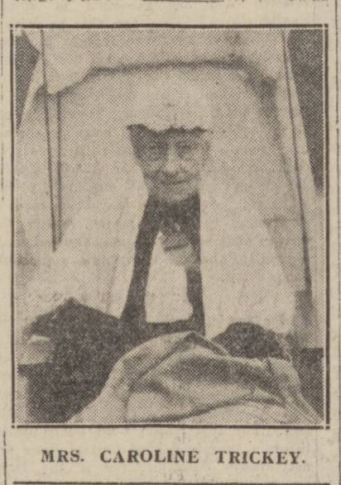 Exeter and Plymouth Gazette – Saturday 15 March 1930 © THE BRITISH LIBRARY BOARD. ALL RIGHTS RESERVED

The British Newspaper Archive has had the inspired idea of looking at the longevity secrets of centenarians from the past, as reported in the newspapers of their day. And it turns out they are very similar to modern 100 year olds.

We learn that in 1930 Mrs Caroline Trickey put her longevity down to being content with her lot and ‘never eating more than I want to’. Shades here of Mary Williams, who said her secret was eating just one meal a day.

In complete contrast to Mrs Trickey, 100-year-old Miss Fanny Daniel of Combe Martin said her secret was ‘eating well’. In 1926 she told her local newspaper: ‘I have always had substantial food. My people used to kill a bullock for the house so you see I have always lived well’. There’s an echo there of Ruby Byford, whose family said her secret was ‘eating for England’.

Most entertaining however was Mr Zaro Agha, who claimed to be 160 and to have fought in six wars (one at the age of 100), been married 12 times and met Napoleon. His secret – told to the Dundee Evening Telegraph in 1934 – included being vegetarian. That’s similar to Dr Ellsworth Wareham, whose secret was veganism.

However there are some differences. No one recently has suggested that lifespan can lengthened by an injection from the testes of monkeys. The offer of that rejuvenating ‘moneky gland’ treatment was made by a Dr Serge Voronoff but rejected on the not unreasonable grounds that it was unnecessary: Mr Agha was already pretty old and ‘had never felt younger’. It seems that he had not got to 100 (or 160 even) without being able to know a charlatan when he saw one.

Source: How to live to 100 : History’s centenarians reveal their secrets